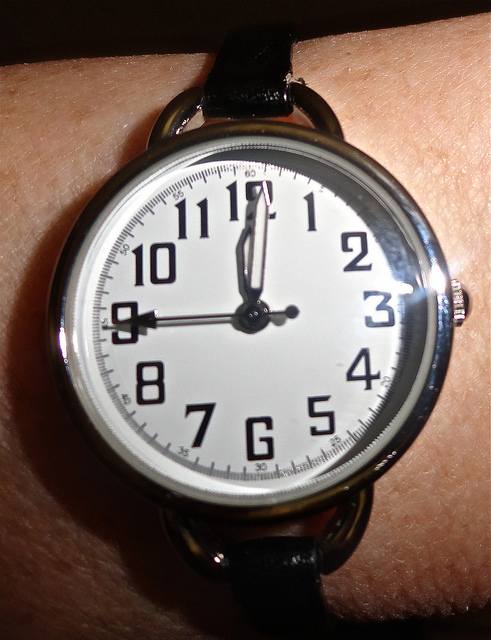 The first week of our sixth year with Alpha Omega Christian Academy has just about come and gone. It’s been a full one, with numerous challenges and rewards, but as a day or two off before the next week draws near, it seems like a good time to revisit this post from July 3, 2012.

Let’s have another look, shall we?

With tomorrow being a national holiday, that surely sounds tempting: just a day to do whatever comes to mind, or nothing in particular.  I feel having a day with a plan like that once in a while is beneficial.

There’s another way of looking at whether or not we’re planning on doing anything tomorrow:  it’s the “I’m going to get to that…Tomorrow!” list. At this point in my life, I’ve seen several things die of old age on my “Tomorrow!”  list.  But a few crumbling remnants did make it over to “Oh, why not go ahead and try?”, and those that did made lasting impressions.

Like the time I decided for real that credit cards were crazy, and that I was about to be.  Mind you, that was no heroic thing.  It came after I totaled my less-than-one-year-old car, and began to look at my , , frantically scrawled figures, to see what I could afford.  Answer:  “NOTHING”.  Very disappointing.  A single mom, I’d been digging a hole deeper and deeper in credit card debt, thinking I’d get straight “Tomorrow!” I really couldn’t afford much of anything with real money.

I was directed toward the solid financial teaching/debt-lambasting of Dave Ramsey, who had gone bankrupt before learning financial principles.  Of all the good programs on getting out of debt, his communicated to desperate, debt-strapped people (already feeling like idiots), “You’re no dumber than I was, just don’t stay that way!”  The courage to try was imparted. So, with much prayer, and a plan for trimming a few non-essentials from our new budget, the cards were cut up, and I humbly went shopping for something closer to my reality-range. The progress hasn’t been perfect, but having greater balance has been golden. As long as that decision to stop and turn around was on the “Tomorrow!” list, though, I got no benefit from it — only mounting anxiety.

Another thing off the “Tomorrow!” list, is what I’m doing now:  Writing.  In my social work career, the opportunities to compose and collaborate on documents seemed among the most rewarding tasks I had. I grew to see it as more than an interesting sideline and more of a worthy pursuit.  How did I discover that?  By starting.

So you may be processing that last idea: “You found out by starting, and you started by finding out?  Huh?”  Let me explain.  I read someone’s blog I wanted to comment on, and to do so, had to sign up for the blog-hosting site (wordpress.com). When I did, I realized that writing a blog was in my power to do (and was free). That was exciting — and scary.  But the overriding sense was that I felt I had something to say.

The chance to read others’ blogs through Word Press showed me there were writers out there actually encouraging the writing of people they’d never met.  Who knew? Kristen Lamb‘s blog was of this sort, and by looking at the blogs of others who’d commented on her posts, I found several more with solid advice, and the ability to help growing writers learn.  They actually seemed to care whether I wrote that book that’s been on my “Tomorrow!” list so long.

So, my point? One of my favorite sayings is: “It’s easier to guide a vehicle in motion.” Duh, of course it is.  Yet how often have we looked at things we’ve dreamed of and thought, “I just don’t know if I could.  Maybe I’ll look into it…Tomorrow!” The way to know if it’s time to begin is: to begin — just take steps.  Baby steps are great.  With so much of the world’s knowledge at your fingertips (through internet on computer and smartphones, or even your good old neighborhood library), you have the ability to learn about your interest freely. Just begin to inquire: try, and see what can happen.

One more story.  When I retired a year ago, after 27 years as a social worker, I had some misgivings of “What next?”. I prayerfully asked that, and by the time retirement was official, I was deeply immersed in opening our church’s Christian School — our pastor’s vision, but an area I’d felt a connection to many years before.  Learning as we went, all involved were all amazed at the resources and support we found.

Looking back on this first year reminds me of this phrase from God’s word: “…the Lord working with them…” (Mark 16:20). It describes men who didn’t sit back and wonder if they should start, but began, and knew they weren’t working alone. The Lord worked with these apostles who were following his command to preach the gospel (detailed in the book of Acts), and he confirmed their word “with signs following”.

Obviously there are seasons for things in our lives, but when there’s a tug to pursue a passion, even if your ability seems fragile, the doing something — moving it from the “Tomorrow!” list — is the only way to know what can happen. So, just don’t plan on doing anything “Tomorrow!”  See what you can start “Today!”

A site where I share my thoughts on a wide range of topics.